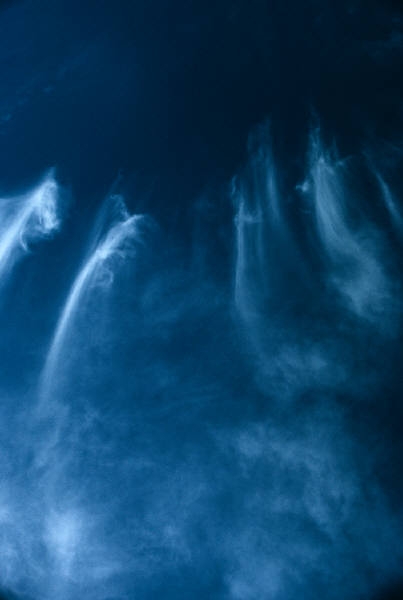 But what a relief it can be

to meet God right here in the

to feel enduring love like a stroke of pure luck.

in My Bright Abyss

I’ll never forget my first terrifying encounter of God.  I was about 15 years old and sleeping outside on a hot summer’s night.  I looked up at the vast star studded sky, trying to contain the idea of eternity in my mind when all of a sudden “boom!” I was thrust into the void, outside of time and space.  My mind rebelled – my body, flooded with adrenaline and all sorts of other hormones, leapt out of my sleeping bag and I ran into the house.  My Dad was still up; the soft light of the table lamp by his chair cast a warm and soothing glow on the room.  I told him some of what had happened to me – only I didn’t call it “God”.  To me it was some overwhelming, incomprehensible experience of pure, clear, terror.  An encounter with the idea of eternity, with what I now know is an experience of the Divine.

This is not the warm fuzzy experience that most people talk about when they have an experience of the transcendent.  That is the one we all would choose – the love that flows from some unknown source, up and over and into every molecule of our being, the peace that passes all understanding, the “it is well with my soul” kind of encounter with God.  That, too, is the face of God, the one we can look at without dying, without burning up with some kind of spontaneous combustion of the soul.

For years, I thought that was the only valid experience of God – surely the terror I had felt that night, and continued to feel off and on throughout that summer,  and less frequently throughout my life, was some sort of anomaly.  Really, if one is inclined to pathologize such experiences, it was a good, old-fashioned panic attack.  But not exactly, because what happened to me was fear – fear of the eternal, of the never-endingness of time and space; it was the result of trying to wrap my mortal, finite mind around the immortal and infinite reality of God.

The Bible says, “No man can see God and live”.  I understand that.  If a glimpse of God could result in such an overwhelming, mind-blowing conflagration of body and soul, I can only imagine that a full view of God would be too much to bear.  Even the angels apparently cause humans to tremble and quake, otherwise why the common exhortation “be not afraid”?   So I have come to understand that sometimes God shows up as a peaceful flowing river and other times, perhaps not so commonly, he gives us a glimpse of his full divinity and we cry out, shielding our eyes, “No! This cannot be!”

Poet and writer, Christian Wiman, in his book, My Bright Abyss, writes that “Christ is contingency”.  “Contingency”.  Meaning subject to chance, not absolute.   Meaning uncertain, as reality, right down to the molecular level, is uncertain.”  By this he means that Jesus, being fully human, understood our suffering because he experienced it, too.  “God is given over to matter, the ultimate Uncertainty Principle.  There’s no release from reality, no “outside” or “beyond” form which some transforming touch might come.  But what a relief it can be to befriend contingency, to meet God right here in the havoc of chance, to feel enduring love like a stroke of pure luck.”

Christ, being fully human, even as he was fully divine, had to have had the same experience of terror that we all face.  Indeed, even now, in his promise to never leave or forsake, we know that he is there with us, not shielding us from the suffering of life, but experiencing it with us now as he did when he was here in his human form on earth.

For those who want (and who doesn’t?) a palliative in faith, this may not offer much consolation.  But I believe, and I think I am in good company, that there is a price to pay for encountering the Divine.  Jacob walked with a limp after he wrestled with God; Hildegard of Bingen suffered tremendous headaches after her visions; St. John of the Cross was locked in a closet for weeks during which time he discovered his own “dark night of the soul”.  But none would relinquish their afflictions having seen the face of God, in whatever form a human can tolerate.

For some reason, probably more to do with our modern cultural fixation on a pain-free existence, we have separated suffering from faith, and all that goes with it, fear, pain, grief, sorrow, despair.  These are words that have been pushed off the center stage of our modern day Christian theology – most particularly in the United States.  So those who do feel these emotions are left to wonder where they have gone wrong.  “If you are feeling abandoned by God, who moved?” we are asked.  The implication being that we did – God does not move.  It leads me to wonder if these same individuals would ask that of Jesus as he cried out on the cross, “my God, my God, why hast thou forsaken me?”  Would they be yelling up to him “Hey Jesus, who moved?  You need to get right with God.  There is some sin in your life blocking you from feeling God’s presence.”   Possibly.

It is not popular to speak of the shadow side of faith these days and I don’t really blame people for wanting to hear about the upside of an encounter with God; I certainly prefer it myself.  But I have never been one to ignore the truth which is that human existence is a mixed bag and I cannot separate this truth from the idea that divinity is part of the natural order.  God is both inside and outside of time and space.  This is what the Incarnation has revealed to us.  And as such, there are no guarantees, apart from the promise that Christ has given to bear with us the joys and the sufferings of life.  As Wiman so eloquently explains, “…contingency is the only way toward knowledge of God, and contingency, for Christians, is the essence of incarnation.  And incarnation, as well as the possibilities for salvation within it, precedes Christ’s presence in history, and exceeds all that is known by the term, “Christianity.”

Now, when I think back to that terrifying night so long ago, I understand it both psychologically as a coming to consciousness and spiritually as an encounter with the eternal God.  Having lived a life that has seen its fair share of grief and pain, as well as joy and happiness, I know that God sometimes comes to us like a whisper on a breeze and sometimes, not as often, as an indescribable experience of awestruck terror,  as eternity bumps up against our frail and mortal humanity.  Strange as it may seem, I find that to be a comfort.  It reminds me that I am not God and I can release myself and all my imperfections into the arms of the one who is.